The city where it is Christmas every day 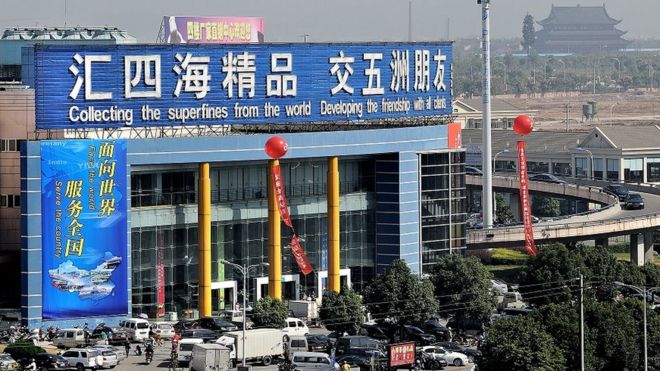 Yiwu wholesale market is the center of the world's supply of Christmas decorations. In the Chinese city of Yiwu, Christmas comes 365 days a year. But you have to look for it.

Yiwu could be anywhere in workaday urban China. It is a smoggy, swarming, unremarkable place some 300km (186 miles) south of Shanghai.

Except for one thing - a series of vast halls that constitute what is claimed to be the world's biggest wholesale market. That's where Christmas happens every day, even if most Chinese people themselves do not really believe in it.

There's nothing grand about it - but inside the utilitarian buildings there's a dazzling cornucopia of festive stuff ready for the world's consumers. There are hundreds of booths, with thousands of different glittering things to buy by dozen, or the hundreds, or the container load.

There are cascades of plastic flowers, and batteries of singing Santas, there are life-sized reindeers, and twinkling LED garlands in more colours than a rainbow.

There are dozens of cuddly soft toy stalls, with characters bearing a peculiar familiarity to well-known global trademarks.

There are ribbons and baubles, and lights everywhere. Dazzled, the eye does not know where to look, what to take in. You amble on, floor after floor of glittering stuff ready for the export market.

Each of the more than 60,000 booths seems to represent a separate business. Each of them specialises in a very particular product, often from far away factories.

It's not just toys and baubles. There are hundreds of booths of festive gloves and hats, tools, car accessories, bicycles, and pots and pans. Most of the products are gaudy and low tech. They say that 1,700,000 different things are on show. I gave up counting them.

Effectively this mind-boggling place is the shop window for the great Chinese industrial revolution, the extraordinary rush to turn the country into the global manufacturing powerhouse that has transformed China's cities over the past 30 years.

It's one of those statistics which nobody can prove, but they say that more than half of all the world's Christmas decorations are made in China. A huge proportion of them are on sale to global buyers in the endless booths of the Yiwu wholesale market.

But why did Yiwu become the centre of China's Christmas goods industry?

As in other Chinese cities, capitalism seems to have broken out in Yiwo as an ingenious response to abject poverty.

They tell you that farming was always dirt poor here. For hundreds of years, ambitious locals seeking another income equipped themselves with trays of small household items to peddle round surrounding small towns and villages.

These were the so-called stick men, who still exist across China. Their sole asset (apart from physical strength) is a long pole, to which they attach two balancing loads at either end. They then balance the sticks on one shoulder, and walk to the load to where it is wanted - for a very small fee.

Yiwu's stick men did not wait to be hired. Instead they bought goods, crammed them into bamboo trays, balanced them on their sticks, and walked out to sell them in the surrounding region, announcing their arrival in a village by twirling a toy drum on another, tiny, stick.

It was very small scale. The itinerant traders of Yiwu would even accept chicken feathers in exchange for their goods, a commodity many farmers produced. The feathers were light to transport, of course. And they were valuable to make feather dusters with, or sold for use as fertiliser dug into the soil on other people's land.

The chicken feather traders became famous, a symbol of the enterprise of the area. In Yiwu there are life-sized statues of them. Restaurants have replicas of their trays on show as a talking point.

From 1949, under Communism, even this minor private enterprise was frowned upon. But it broke cover again at the end of the 1970s, inspired by the sweeping economic reforms ushered in by President Deng Xiaoping, under the banner "To Be Rich is Glorious".

In 1982, traders opened market stalls in the open air. And buyers began to flock to the city, for the sheer convenience of being able to sample the fruits of the Chinese industrial revolution, put in an order and wait for their goods to be shipped all over the world.

It was a year-round trade fair, and what it showcased was the labour-intensive, low-cost products that any developing country starts by making in hundreds, and then thousands.

So 33 years after the YiWu wholesale market started, what does it tell us about the state of the Chinese economy whose hell-for-leather growth it represents?

The official figures show that China's growth rate is slowing down, and the wholesale market traders admit that times are harder than they used to be.

Overseas buyers tell me that after many years when Chinese prices stayed the same, they're now on the rise. Not by huge leaps, but yearly increases of 3% or so are more than foreign customers are used to.

The price rises are not just a response to market forces. They reflect the official Five Year Plan policy to allow the workers who've powered the new China to share in the gains... at least a little bit.

But for China's customers, rising prices pose a problem. Some buyers are talking of looking to other developing countries for the goods they need - India perhaps, or Indonesia.

But in YiWu there are trusted local agents who for as modest fee can supervise overseas orders and get them on the ships, even when the buyers have long gone home.

And the Chinese supply chain is now well-established, from factory, to packing supplier, to dock, to a long container ship voyage, and then through local customs on to the domestic warehouse. This season's 2015 orders started arriving in Britain in August.

Overseas buyers in Yiwu a month or two ago had Christmas 2016 on their minds. Next year's novelties will feature LED-illuminated liquid filled displays, I'm told. Very cheap voice-controlled toys are on the way, too.

You would think you would get a vivid picture of the violent variations of world trade from a day mingling with the merchants in Yiwu Wholesale Market. But if the salespeople know what's going on, they are not giving much away.

Perhaps the sheer momentum of the Chinese manufacturing machine swamps all other considerations.

In the wholesale market booths where the finished trees, and so many other things, are on offer to global buyers, there is little gossip about industry trends or supply and demand. The salespeople sit there, waiting for orders. The factories make it, and at YiWu they wait for the orders to come in.

It's worked for more than 30 years of ever-increasing activity. What could possibly go wrong now? How many plastic singing Santa Clauses does the world need? One day in Yiwu they will probably find out.

Contact us to talk with your China agent now!